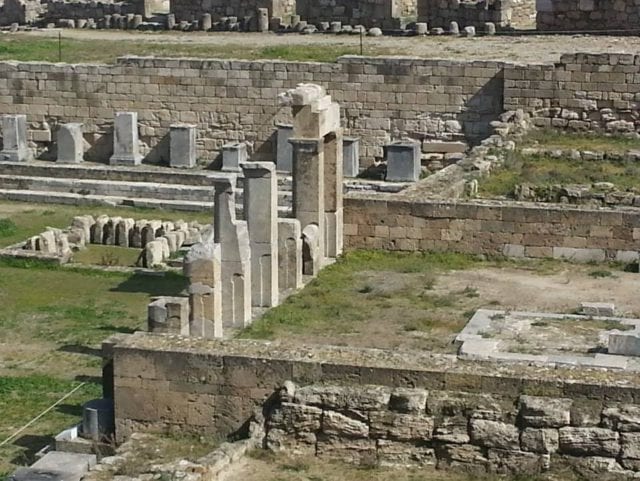 Although I have lived on the island for many years now, I am ashamed to say that I have only visited Ancient Kamiros In Rhodes a few times.

Considering how much there is to see and learn here, I am sure after this handful of visits, I have only touched the surface of the history in this location.

I actually live approximately 15 Kilometers from this ancient city. With this in mind I promise to make another trip here to take some photographs for you to see. For now though, I will share some pictures with you later in this post that I have made from previous visits!

Although the ancient city is centuries old, an archaeological project and excavation was undertaken by the Italians in 1914 which uncovered and revealed much of what you can see today.

Ancient dwellings, bath houses, the market area and ancient Doric columns were discovered and they now sit here in all their glory for the world to appreciate.

This excavation came about, as naturally the city was buried under the earth over time. In 406 BC, the inhabitants of Kamiros vacated the area of to live in the new city that had been established – Rhodes. This led to the city being abandoned and lost.

The Location Of The Ancient City Of Kamiros

Kamiros is one of the three ancient cities (and the smallest) to be developed on the island of Rhodes. Lindos and Ialyssos were the other two. Later these became the foundations for the city of Rhodes itself.

It is located on the West Coast of Rhodes at the foot of the Akramytis Mountain and runs close to the beautiful sandy beach of Ayios Minas. It is approximately 35 Kilometers from Rhodes City to The Ancient City Of Kamiros and takes 45 minutes by car and bus!

The Early Occupation Of Kamiros

In the nearby village of Kalavarda, an ancient Necropolis (cemetery) was uncovered in 1859 which lays to the West of Kamiros. The findings within this cemetery suggest that the Achaeans (Mycenaean Greeks as described by Homer) occupied and resided in Kamiros during the prehistoric period, which was before the arrival of the Dorians (although Homer mentions that Kamiros was founded by the Dorians along with Lindos and Ialyssos)

The history of Kamiros has been uncovered by the findings of a number of other cemeteries in the nearby area. The Makry Langoni Cemetery for example, revealed the finding of the Stele of Krito and Timarista which I talked to you about on the Rhodes Archaeological Museum page. This is now where this 5th Century Sculpture can be found on display!

Other artifacts have been recovered from various cemeteries in the vicinity of Kamiros too. Items in the form of tools and pottery show that Kamiros was an agricultural area and exported goods such as olives and wine to mainland Greece and other parts of the Mediterranean.

The Archaeological Site Of Ancient Kamiros

Ancient Kamiros today, is an archaeological site which is open to the public for you to visit.

It is an Ancient City that was rebuilt in 226 BC after the same earthquake that destroyed The Colossus Of Rhodes hit the island.

It is a Hellenistic site and because of this, it displays some key features with typical formations and designs from this era.

It is divided into two sections when it comes to the structures. Namely, Public and Private.

Related Posts  The Village Of Kremasti In Rhodes

The city was built into three uneven and different sections.

In the Market area on the North West corner you will see two columns of an ancient temple. These are said to be dedicated to Apollo, The Greek God of Music, Poetry, Healing and much more and they date back to the 2nd Century BC.

As you make your way to the East of this ancient temple you will encounter the Fountain Square. The fountain itself was actually made up of six Doric (architecture) columns which have been restored.

A second square was built later on, and this had a water well in the middle. When this was built, the original fountain was refurbished and modified. This took place at the start of the 3rd Century BC.

From the Market Area, running all the way through the city, is the main street leading up to the Acropolis. Laid out on the left and right of this street are all the ruins of the ancient dwellings. This residential area connects the low level market area with the Acropolis at its peak!

Personally, I love the residential area. The ruins really speak to you and it is not hard to imagine how things used to be in days lost, and the way life was. Standing there at the doors of ancient houses that were inhabited centuries ago is quite a special feeling.

In this area you will also find other dwellings that housed bathing areas.

At the peak of the city you will encounter The Doric Temple Of Athena Kameiras. This replaced an earlier temple that was also destroyed in the 226 BC earthquake.

To the North of the temple you will find what is an ancient water supply which dates back to the 6th Century BC. This was in use until the 3rd Century BC, as a large Stoa was later put into use.

The original water supply could accommodate six hundred thousand liters (600,000) of water or 600 Cubic Meters, and this could provide water for up to four hundred families.

Watch This Short Video For Some Stunning Views Of Ancient Kamiros

How can I sum this amazing place up? Amazing? Breathtaking? Wonderful?

It is hard to put such history and beauty into words.

When you walk into the Ancient City, it really does take you back in time, and you immediately want to walk around and learn as much as possible. If you ever wanted to literally taste history, you will get it here!

I love the ancient ruins, the monuments, the dwellings and layout. They really speak to you.

Wherever you walk, there is something of interest. Not only that, but as you walk up to the higher ground near the Acropolis, you have the most amazing sea view staring right at you. It really is a picture from a postcard.

If you ever manage a visit to Rhodes, then The Ancient City of Kamiros is a MUST SEE!

You will find it open in the summer months between 8 am and 8 pm, and the entry is 3 Euros per person!

I hope this information here gives you a taste of what this city has to offer. If you have any comments or questions please feel free to leave them below.

Have you visited the Ancient City Of Kamiros? Maybe you are planning a future visit and would like to know more? Either way, I always love hearing from you all. Get in touch and I will get back to you. 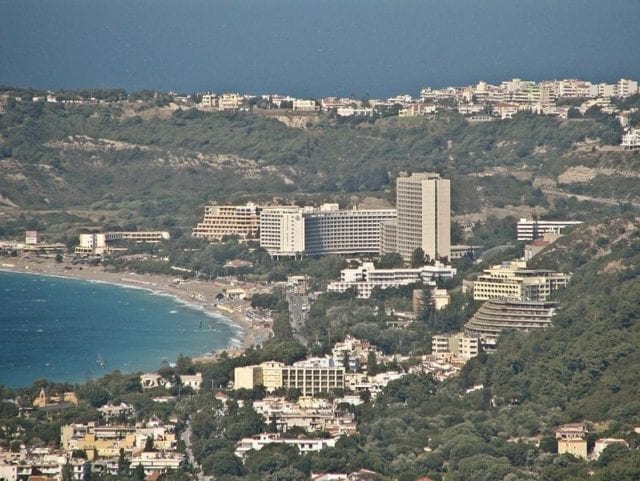 The Seven Springs In Rhodes 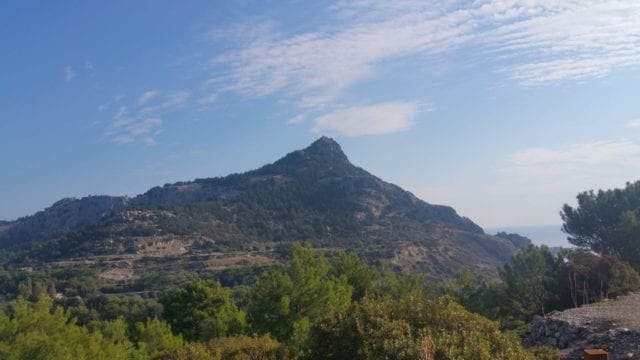