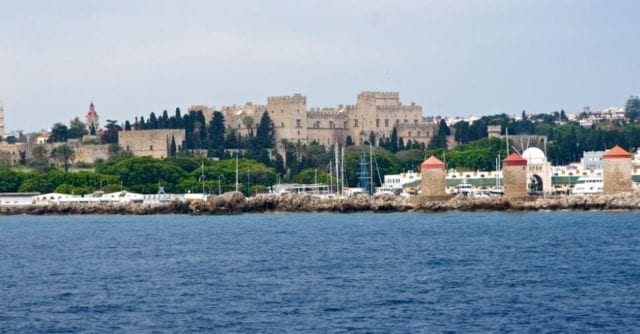 It is well documented that during the times of the occupation of the Knights Of St John on the island of Rhodes, it was the best period. The island was thriving and was doing well back even in these times.

The order of the Knights had also been established as an alliance in Jerusalem before this time. This was brought about from merchants from Italy who were inhabitants of the holy land.

The holy lands are in Israel and are called this because it is the land that belongs to the people all relative to the birth and crucifixion of Jesus Christ.

The Order Of The Knights went under the jurisdiction and regulation of the church after 1099, the time of the Crusaders occupying Jerusalem. After this the order attained massive strength and took up the role of a militant authority.

Saladin, the first Sultan of Egypt went on to seize Jerusalem in 1187 and with this the Order Of The Knights relocated to Acre in northern Palestine and set up operations from there.

The Arrival in Rhodes

After this they landed in Cyprus. Handed over to them was the area of Limassol by King Henry, but their presence here was short-lived.

After 18 years in Limassol they went on to fight the inhabitants of Rhodes. In 1309 the Order Of The Knights Of St John established their force here on the island of Rhodes.

They also went on to control the area of Smyrna, which was a powerful and strategical point in Anatolia at that time. This land today is called Izmir which is in Turkey!

The Surrender To Suleiman

The Knights remained on the island of Rhodes for over 200 years. On the 29th of December 1522 control was relinquished to the Sultan Suleiman.

This battle had ensued for over 6 months. The Knights were aided by the inhabitants on Rhodes and put up a fierce fight. The Sultan was too powerful though and finally the Knights were forced to surrender.

With this defeat the Knights were forced away and they went on to relocate in Malta. This was achieved with the help of the Pope and Charles V and from there they were renamed The Knights Of Malta. The Turkish went on to remain on the island of Rhodes for over 400 years until they were overridden by the Italians in the 1900s. This led to what is known today as the more modern times of Rhodes.

However, even when you visit the island even to this day, you can really see the impression that the Knights left behind on Rhodes.

churches. To be standing in the same place as where all this happened truly is an insatiable feeling.

The Assembly Of The Knights

The order of the Knights were separated into three groups or classed of members.

The Priests and the Serving Brothers were not required to be of Noble Class like the Actual Knights were, however they were required to be born free. IE not born as slaves.

All the members of the order were from a Catholic background and were from all around Europe.

Because of this the order was divided into different groups reflecting the language or “Langues” as it was known then! There were 7 groups as below!

Spain was later divided into the following!

Each group had its own master and council and they were all required to stay in their own separate areas of the Order.

The Grand Master had overall control in the Order and was elected by the Order itself. The Master of each group was responsible for their own legal and disciplinary duties but were required to assist The Grand Master with government issues.

For the general operation of the Knights, French was used as the general language for communication purposes, but all documents and legal papers were written in Latin.

Did you know The Order Of The Knights Of Rhodes was made up by members of different countries? Did you know the Actual Knights had to be of noble standing?

Personally I find the history of The Knights my favorite and love reading about them.

Living in a place where they used to reside all them years ago also helps, and it really brings it to life for me.

The Knights are rich in history and even today The Palace Of The Grand Masters is one the most visited places on the island. To walk through The Medieval City inside the incredible walls really brings it to life and it is something everyone on the earth should be able to witness. Really magnificent.

If you have any questions or you have something to share I would love to hear from you. I always welcome your thoughts so feel free to leave me a comment below and I will get back to you as soon as I can!

Byzantium And The Middle Ages In Rhodes