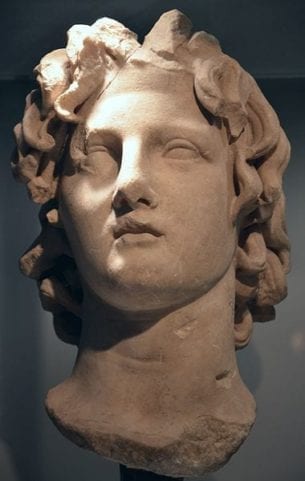 In this section I want to talk to you about the classical antiquity period of Rhodes.

Previously when I was talking about the towns of Kamiros, Ialyssos and Lindos on the prehistory section I mentioned that the Dorians developed these areas and they later became a strength with prosperity.

Well in the beginning they were of course individual towns and self-reliant, but later

on down the road they were merged with another three towns namely Knidos, Kos

and Halicarnassus and this amalgamation went on to be called the ‘Doric Heaxpolis’.

It was then 6 towns together. 6 towns with a reputation for order in the way of religion and politics.

Asian Minor as a whole became under the control of the Persians around the 4th/5th century and Rhodes was included within this area. The Greeks however were able to fight and defeat the Persians later in 478 BC and they then went under the command of the Athenians! This was also known as the ‘Delian League’.

In 431 BC the Peloponnesian War came along. Rhodes however tried to remain indifferent between the Athenians and the Sparta forces but later sided with Spartans. Before the end of the war though in 404 BC the island had gone its separate ways. Rhodes had pulled out of the war completely.

The island of Rhodes did come under the influence of the Persians again later on in 340 BC, but it was short-lived! They were defeated by Alexander The Great!

During the Peloponnesian War it was decided by the Rhodian people to develop a new town. This was for reasons of strength, protection and increasing security. Therefore, the three existing towns on the island (Kamiros, Lindos and Ialysos) combined in order to create the capital city. See The Ancient Rhodes section for more information on this.

From this the capital city of the island was founded and named Rhodes. It was located on the very northern point of the island where it still stands in all its glory today!

During the battle to defeat Tyre in Asian Minor, the Rhodians lent their assistance to Alexander The Great to complete this fight.

This came about when the Macedonians and the Greeks took the decision to allow a stronghold to be built on Rhodes.

After Alexander The Great

Once the empire of Alexander The Great had been disassembled there was a big push to increase connections with Egyptian Ptomelies. This was for reasons of finance and economics.

However, war was being planned at that time.

Antigonos (the King of Syria) had the Egyptian Ptomelies in his sights and wanted to strike but he feared that the Rhodians would take sides with them.

Because of these actions, The King Of Syria dispatched his son to seize the town of Rhodes. This man was named ‘Dimitros Poliorkitis, also known as ‘The Besieger’.

Unfortunately for ‘The Besieger’, Rhodes was able to defend itself against him and

his forces. For one year they fought, but finally ‘The Besieger’ was forced to retreat.

He left the island with his forces in embarrassment. During this retreat they also left all their materials behind.

These materials were later used to collect the wealth needed to build the famous Colossus.

The Colossus was a huge icon made of bronze and depicted Helios (The Sun God) and it was built as a token of thanks and appreciation to the gods!

After The Fighting And War

Once Rhodes had stood its ground against the King Of Syria and The Besieger the island really went on to prosper.

Tyre had been defeated by the late Alexander The Great and from there Rhodes became a power both in the way of commerce and seafaring.

The island went on to put into practice the ‘Rhodian Naval Code’. This code of law is said to be one of the most important documents worldwide.

The Romans in fact did come onto the scene a little later but after attempting to remain peaceful, the Rhodians came under fire from the Roman Senator – Cassius, and were defeated in 42 BC.

As you can appreciate, Rhodes has indeed experienced a lot in the way of history and has stood up to the test of war in years past.

After all that has taken place the island of Rhodes still stands proud in the Mediterranean and continues to prosper even in these modern times.

Do you have any thoughts on the classical antiquity period? I would love to hear your point of view. Leave a comment below and I will get right back to you!

The Roman History Timeline In Rhodes

Some Prehistory Facts Of Rhodes