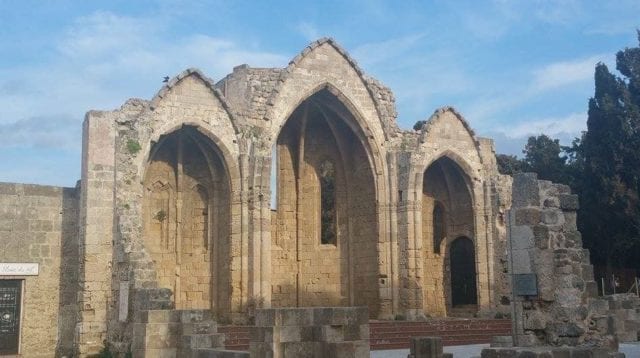 You will remember that I touched briefly on Chora And Bourgo on The Medieval City In Rhodes page, and here I would like to go a little deeper into what it is all about.

The Medieval Town was actually constructed into two different sections. The Northern Section – also called the Collachium, and the Southern Section which is referred to as “Chora”. In the days of The Knights Of Saint John, they called this southern section “Bourgo”

The Collachium was (and still is) predominant for The Palace Of The Grand Masters and the churches of the Knights order. The Chora section was used to home the Greek people and any other people from various nations who worked and resided in the Medieval Town.

The famous Socrates Street separates the two sections as it runs right through the middle of the city. Just off this street you will find Lachitos Street, which was the only place communication was permitted between the two sections in the olden days.

Suleiman Mosque. It was constructed in 1522 to celebrate the victory of the Ottoman Empire over The Knights Of Saint John. Also, called Suleiman The Magnificent; he was the 10th appointed Sultan of the Turkish Rule (The Ottoman Empire) from 1520 until he died in 1566.

The Mosque Of Suleiman is located at the top of Socrates Street and it went under renovation work in 1808. You can identify this structure because of the huge pink colored dome roof.

A lot of the churches that were in place during the reign of the Knights were transformed into Mosques, and others were built by the Ottoman Empire from the beginning. A lot of these structures have since been demolished though, after the Italian Forces made lots of changes and renovations during their campaign here.

Also in the same area as the Mosque, you will find the Muslim Library and the Turkish Baths.

If you leave the Suleiman Mosque and head down the hill on Socrates Street you will find yourself in Ippokratous Square. Along the way you will find all the street is packed with people and places to buy food and souvenirs.

As you enter the square you will see the Ippokratous Fountain which is of Turkish design standing in the middle of the square. It has running water and it is quite a hot spot for people to stop, take photographs and have a snack from one of the nearby vendors.

As you look around you will see some huge stone steps where people sit and pass the time. I am sure not many of them know that this place was of high importance during the days of the Knights.

These steps are part of a structure called ‘Castellania’ and it was constructed in 1597. The lower floor was a place where local vendors did their trade, and the upper floor was utilized as a courtroom. I am sure a lot of heated debates were carried out here 🙂

Just around the corner from this you will see the huge Marine Gate. This is one of the eleven gates into the Medieval City and probably the most famous simply due to its size and beauty.

It was a stronghold of the city in years past too. As it was (and still is) located close to the waterfront, it was seen as impossible by opposing forces to set up a good attack from there. As history has it, at one point the water came right up to the gate!

The huge round towers of The Marine Gate make it very noticeable and again, it is a very popular area with tourism as you can capture some amazing photographs here.

in the direction of the Jewish Quarter.

Here in the square of The Jewish Martyrs you will see another amazing fountain. On the fountain you will see three seahorses standing proud on the top, and the outside is decorated with tiles also displaying the seahorses and other sea creatures such as the octopus.

All around you will see outlets selling souvenirs and food, and these shops are occupying some of the old structures of the Old Town.

Here you will also find The Palace Of The Admirals. This is a structure from the 15th century, and was also home to the Archbishop Of Rhodes before the Ottoman Empire took control in 1522.

Our Lady Of Chora

As you progress further, heading away from the Jewish Martyr Square and working your way around the east edge of the Old City, you will see the amazing ruins of Our Lady Of Chora. This is an old Catholic Church and was the biggest in all of Rhodes in its time (constructed in the early 15th century). The construction of the church is on both sides of the street.

I went there only a few days ago to take some photographs. One of them is the information board you will find at the location. I have also put it below. Click on them to enlarge the images!

I just want to reiterate here, that the Old Medieval Town Of Rhodes is a huge place, and for me to sit here and write about every aspect of it would take me a lifetime.

I hope here though, that I have offered you a taste of the Southern Section of the city, but of course if there is something you would like to know, just ask me 🙂

Leave me a comment below and I will get right back to you.

I would also love to hear from anyone out there that has been to this beautiful setting. I am sure some of you would not mind sharing your experience.

Thanks so much once again for reading, and I really look forward to hearing from all of you soon. 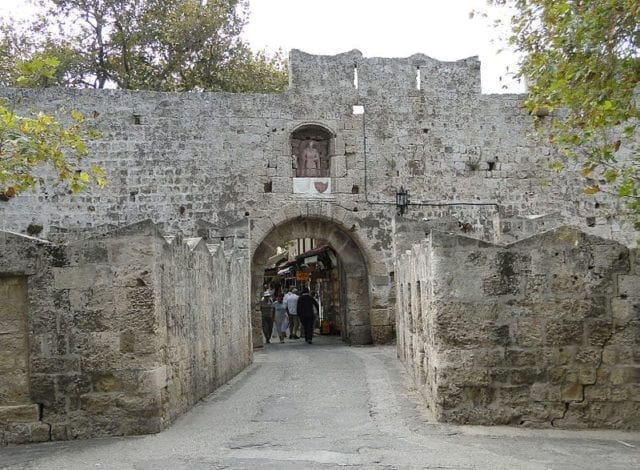 The Walls And The Gates in Rhodes